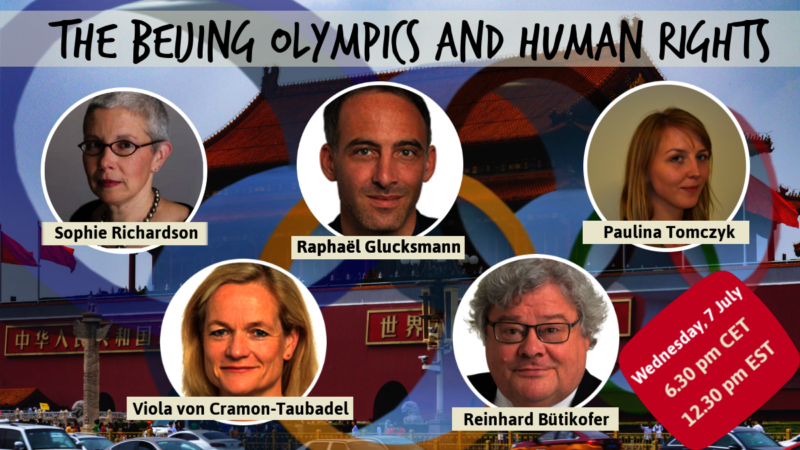 In February 2022, the Olympic flame will be lightened in Beijing to mark the beginning of the Winter Olympics. China’s capital will thus be the first city to host both the Summer and the Winter Games and it is to be expected that the Communist leadership of the country will use this major international event to present a favourable image of China and its policies on a large international stage. At the same time, it will gloss over an increasing number of controversial issues that have appeared since the Summer Olympic Games in 2008 and especially after the ascendency of Xi Jinping to the top of the state and Communist Party in 2012/13.

During the last decade, China’s internal and external policies have taken a negative turn. Domestically, China’s human rights situation has further deteriorated. China’s security organs have put tremendous pressure on China’s civil society, media and legal experts. Ethnic and religious minorities in Tibet and Mongolia are under strict control or put into re-education camps, as in China’s Xinjiang region. Moreover, the Chinese leadership has undermined Hong Kong’s autonomy and freedoms guaranteed to the people of Hong Kong by the Sino-British Joint Declaration and Hong Kong’s basic law. Externally, China’s increasingly assertive policy towards its immediate neighbours has led to tensions, for example in the South China Sea, on the Sino-Indian border or vis-a-vis Taiwan. Finally, but no less importantly, China’s autocrats are trying to extend their political influence to the global stage and even set limits on the freedom of speech in Europe.

A critical discussion about the 2022 Winter Olympics has begun in many countries in North America and Europe. Lawmakers and opinion leaders in several countries have openly questioned the decision to hold the Games in Beijing and called for a political and/or economic boycott. Others have called it “Genocide Games” and thrown their weight behind a campaign to move the Winter Games to another country.

After inputs from the speakers, we will open our interactive online format for a discussion with the participants. The webinar is public; a recording will be made available afterwards.