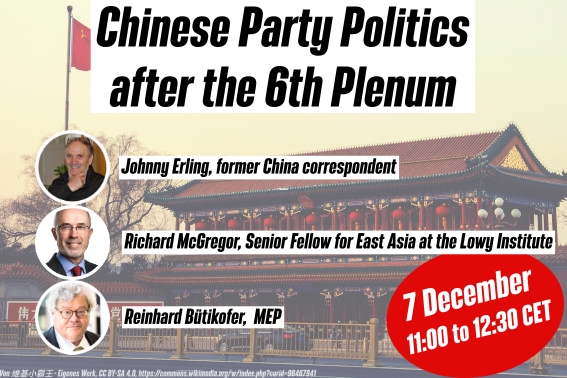 I would like to invite you to my webinar “Chinese Party Politics after the 6th Plenum”, which will take place on 7 December, 11:00 to 12:30 CET.

With the centenary anniversary festivities of the Chinese Communist Party (CCP) coming to a close, the 6th Plenum of the 19th Central Committee of the CCP convened in early November and agreed on a third resolution on the Party’s history. The document further emphasizes the correct action of the Party in guiding China’s development since 1978, it elevated the role of General Secretary Xi Jinping and his ideology and thereby possibly set the stage for his third term and the helm of the CCP.

This emergence of this resolution comes at a particular sensitive time, at which the Party forcefully re-introduced itself into the every aspect of Chinese life, while harking back to socialist policies under the framework of “Common Prosperity”. The decisions of the 6th Plenum will also set the tone for the 20th CPC Party Congress next year, where Xi Jinping will certainly break with the established norm of term limits.

Our distinguished experts are:

I will moderate the webinar.

After inputs from the speakers, we will open our interactive online format for a discussion with the participants. The webinar is public; a recording will be made available afterwards.

I look forward to an interesting discussion and hope to see you there! Please do not hesitate to share this invitation with others.